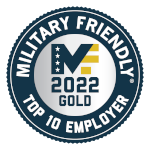 GERMANTOWN, Md.; Nov. 15, 2021 –Amentum, a leading contractor to U.S. federal and allied governments, announced today that it has earned a top Military Friendly ®​ ​Employer designation for the second straight year.

“Amentum is proud to once again be ranked elite among companies our size and recognized for our commitment to our employees who previously served in our nation’s armed forces,” said John Vollmer, Amentum CEO. “With about 10,000 veterans among our ranks, we appreciate how the skills learned in the military make outstanding employees. We share many of the same values, including the importance of leadership and teamwork, discipline and dedication to mission success.”

“Companies earning the Military Friendly Employers® designation create and elevate the standard for military programs across the globe, they have invested in substantive programs to recruit, retain and advance the veterans and service members within their organizations,” said Kayla Lopez, Director of Military Partnerships, Military Friendly ®. “To them, hiring veterans and servicemembers is more than just the right thing to do, it makes good business sense.”

Methodology, criteria, and weightings were determined by VIQTORY with input from the Military Friendly ® Advisory Council of independent leaders in the higher education and military recruitment community. Final ratings were determined by combining an organization’s survey score with an assessment of the organization’s ability to meet thresholds for Applicant, New Hire Retention, Employee Turnover, and Promotion & Advancement of veterans and military employees.

Amentum will be showcased along with other 2022 Military Friendly ® Employers in the December issue of G.I. Jobs ® magazine and on MilitaryFriendly.com.

About Amentum
Amentum is a premier global technical and engineering services partner supporting critical programs of national significance across defense, security, intelligence, energy and environment. We draw from a century-old heritage of operational excellence, mission focus, and successful execution underpinned by a strong culture of safety and ethics. Headquartered in Germantown, Md., we employ more than 34,000 people in all 50 states and perform work in 105 foreign countries and territories. Visit us at amentum.com to explore how we deliver excellence for our customers’ most vital missions.

About Military Friendly ® Employers:
Military Friendly ® is the standard that measures an organization’s commitment, effort, and success in creating sustainable and meaningful benefits for the military community. Over 1,500 organizations compete annually for Military Friendly® designation. Military Friendly® ratings are owned by Viqtory, Inc., a service-disabled, veteran-owned small business. Viqtory is not affiliated with or endorsed by the U.S. Department of Defense or the federal government. Results are produced via a rules-based algorithm. The data-driven Military Friendly® lists and methodology can be found at https://www.militaryfriendly.com/mfcguide/.

About VIQTORY:
Founded in 2001, VIQTORY is a service-disabled, veteran-owned small business (SDVOSB) that connects the military community to civilian employment, educational and entrepreneurial opportunities through its owned asses such as Military Spouse Magazine®, G.I. Jobs ® and Military Friendly ® brands. VIQTORY and its brands are not a part of or endorsed by the U.S. Department of Defense or any federal government entity. Learn more about VIQTORY at www.Viqtory.com.

Developing a Culture of Resilience to Successfully Manage the Next Crisis

Sustainment at the Speed of Relevance